Our team will pursue its goal of improving mobility and traffic flow first by understanding the behaviour of commuters and then by implementing initiatives that help residents adopt new habits: walking, cycling, and carpooling.

Urban development is closely tied to our city’s major arteries. Our city is the hub for several major roadways – such as Highways 20, 30, and 40- as well as the CN, CP and AMT train lines. For nearly 20 years, the city’s growth has led to the building of new neighbourhoods and the influx of new residents has put enormous pressure on the road network. The population has grown and changed; ten years ago, there were fewer families with children living in Vaudreuil-Dorion. Now, more and more families have teens learning to drive, meaning there are more cars on the road. 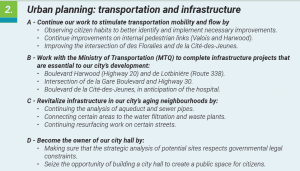 Over the years, there have been many improvements made to the road network. The enlargement of the St. Charles Avenue overpass above Highway 40, the repaving of Harwood Boulevard- all these modifications required the coordination of multiple partners. It is a long and hard process for a city to secure provincial subsidies and to get the necessary authorization to do work on provincially maintained roads.

“As part of the “Sur Harwood” project, the city has asked Quebec’s Ministry of Transportation to cede Lotbinière between Highway 20 and St. Jean Baptiste Street back to the city. As the heart of this urban boulevard, it is essential that we can develop this sector as an important hub for the city,” says Paul Dumoulin, candidate for District 8, de la Baie.

The vision we have for our next mandate would see us continue the work we have already begun. We want to pursue with improvements to the city and respond to the daily needs of the population. We will bring our rigorous management of public funds to each step of the process, all while respecting our citizens’ ability to finance such projects.

It was with the help of the Réseau de transport métropolitaine (RTM) in the Presqu’île sector (formerly the CIT Presqu’île) that many improvements to public transportation were made. The implementation of new routes to major educational institutions near Vaudreuil-Dorion (John Abbott; Gérald-Godin; Valleyfield), as well as increased service on the A-40 Express route to Côte-Vertu metro are two ways that we have met the changing needs of the population.

To continue improving our public transit, we need these strong partnerships. We must also work to educate public transit users, as residents must adapt their habits to encourage the growth of an efficient and viable system.

On another note, the bike path network in the city has doubled in the past four years to a 24-kilometre network across the city. The last section of the network is currently being laid between Montée Cadieux and Chemin Dumberry on Saint-Charles Avenue. Despite delays caused by spring flooding, the path will be completed this autumn. Further sections of the bike path network will go forward once road work on certain streets is complete; for example, the bike path adjacent to Cité-des-Jeunes Boulevard between des Floralies et Émile-Bouchard streets.

As mentioned in our campaign, pedestrian walkways linking the des Floralies and de la Gare neighbourhoods remain a top priority. In the Valois sector, we will work with Canadian Pacific (CP) to create a safe pedestrian link between Rue Marier and Besner Avenue, ensuring access to the commercial area of Harwood Boulevard.

Cité-des-Jeunes Boulevard is yet another important artery in our city. Major roadwork will be required to accommodate the new hospital, which will be located Chemin de la Petite-Rivière; this road, between the AMT train line and Montée Labossière, must be completely redeveloped. Many sections of road of this area are under provincial jurisdiction, and our team will keep up the pressure to ensure that this area is ready for traffic before the opening of the hospital.

“The list is long, but it shows the vision we have for our next mandate,” says Guy Pilon, mayoral candidate for the PAVD

National Day for Truth and Reconciliation

Our Website is officially launched! We are pleased to present you our Website for the municipal elections…